As part of a formal testing process, we undertook testing our paper prototypes, and the goals and the scenarios we had developed.

The tasks we were testing were those identified, during the research stage, as the most popular features of the product. We would test for learnability, efficiency of use, errors and user satisfaction.

Data collection was via video recording and test subjects were to be encouraged to engage in think aloud protocol (TAP).

We were to test two tasks.

Task #1 – An audience member should be able to ask a question, mid-event, within 3 clicks

You are attending a Technology in Nutrition conference as a member of the audience. You have pre-loaded the conference’s Audience Engagement app onto your phone.

During the event, while presenter Peter Peterson is speaking you have a question you would like to put to him.

The event access code is displayed on the event stage – you need to post the question using the Audience Engagement app.

We carried out two pilot tests.

A lot of feedback, not particularly pertinent to the app functionality, actually related to the quality of the wireframes themselves. Users were confused by the visual hierarchy of the wireframes. The lack of signifiers and contextual clues on input elements was leading test subjects to misinterpret the function of elements.

Based on this feedback, time was spent adding more detail to the wireframes, before we moved onto the second pilot test.

The user we tested on was confused after they had submitted their question – in our wireframe we had used a small alert element on the Questions page to indicate the successful submission. The test participant had missed this alert completely, and was unsure as to whether they had completed the process or not . Based on this feedback we added a confirmation page after question submission.

User testing was carried out on three participants, all three represented our target group – they:

Task #2 – At the end of the day, an audience member should be able to access downloaded materials within 2 clicks

Earlier in the day you attended a tech talk called “Javascript for Java Developers: Adjusting Your Mindset”. At the talk, the presenter used an Audience Engagement app that allowed the audience to ask questions, vote in polls, and follow the slides within the app. The talk was also live streamed in the app, for audience members who were unable to join in person.

At the talk, you installed the app on your smartphone, joined the event that the presenter has set up for the talk, and participated in the Q&A.

The next day, you’re in the office and are telling your co-workers about the talk. You decide you want to download the slides from the talk and share them with the rest of the office, via your Dropbox account.

User testing was carried out on three participants. As in the final test for Task #2, all three represented our target group – they:

Test Paper Prototypes to Save Time and Money: The Mozilla Case Study. Retrieved November 19, 2016 from https://www.nngroup.com/articles/mozilla-paper-prototype/

Paper prototypes: The fastest way to test your ideas. Retrieved November 18, 2016 from https://www.lynda.com/Interaction-Design-tutorials/Paper-prototypes-fastest-way-test-your-ideas/476937/540520-4.html 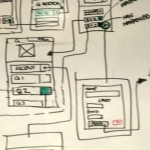